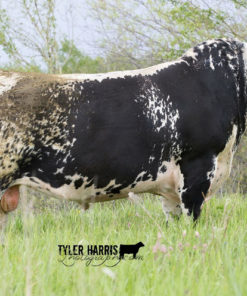 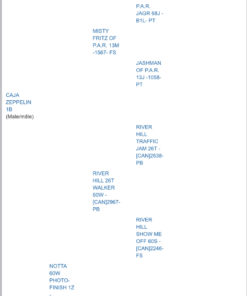 If there was a question as to the impact CAJA Zeppelin has had on the Speckle Park breed, the following will silence any doubts. There were numerous Zeppelin sired calves at the 2018 & 2019 Agribition, two which were previously crowned Grand Champion Female and Grand Champion Bull at Manitoba Ag Ex and INC Six Gun 428F who was the high selling bull at the CWA Speckle Park Sale. Consistent and correct, CAJA Zeppelin 1B calves continue to impress.

All lots that are exportable to the US, UK, AUS, or EU will have export costs at the responsibility of the purchaser. The rates of exchange will be announced at the start of the sale October 8, 2021 12pm CST

Lots of "Right to Flush": Selected animal will be transported to Bow Valley Genetics Ltd. in Regina, SK following her live calving in early 2022. The buyer will be responsible for all costs until the flush is completed and all costs associated with the flush. The Buyer will have the choice of any semen that Second Chance Speckle Park has in storage or supply a sire of their own choosing. All embryos resulting from the flush will be the property of the buyer.

The terms of the sale are to be made in CANADIAN Dollars by E-transfer or Electronic Fund Transfer(EFT). E-transfer can be made to centralprairie_sp_alliance@sasktel.net. If you wish to settle by EFT please email us to have the necessary information sent to you. All settlements must be made before the lots will be released/ownership transferred, unless there has been an agreement made between the seller and purchaser prior to the sale.

Proper settlement must be made in order for the embryos/semen to be released. Shipping arrangements and costs are the responsibility of the buyer. Contact the consignor directly within 30 days of the sale end to make shipping arrangements.

There will be a staggered interval time between Lots closing.  It is recommended that you use Maximum Bidding to help with your bidding.  Maximum Bidding will allow the computer to bid for you up to a level you have entered.

Lot's closing time will be extended by 2 minutes when a bid is placed in the last two minutes.  Sniping will not be allowed with less than one second left.

Your internet speed may vary.  Bid early, bid often and use the Maximum Bidding feature.

This is a fundraising auction for a very good cause. The auctioneers decision is final.

Login to Bid or Register to Bid
Ask a Question